The Sculptor Making a Splash

An interview with underwater sculpture maker Jason deCaires Taylor on his art works in Grenada, Cancun (Mexico) and The Bahamas and his commitment to the regeneration of the Caribbean’s coral reefs.

From Hokusai’s “The Wave” to Turner’s seascapes, the allure and mystery of the world’s waterways have inspired some of the most influential artworks ever created. As French filmmaker and photographer Jacques Cousteau once said, “the sea, once it casts its spell, holds one in its net of wonder forever.” For one artist, the underwater world is not only his source of inspiration but his canvas and gallery too. Jason deCaires Taylor creates sculptures that are submerged underwater where, over time, they become entwined with the marine landscape. He spoke to us about his work in the Caribbean and his plans for the future. 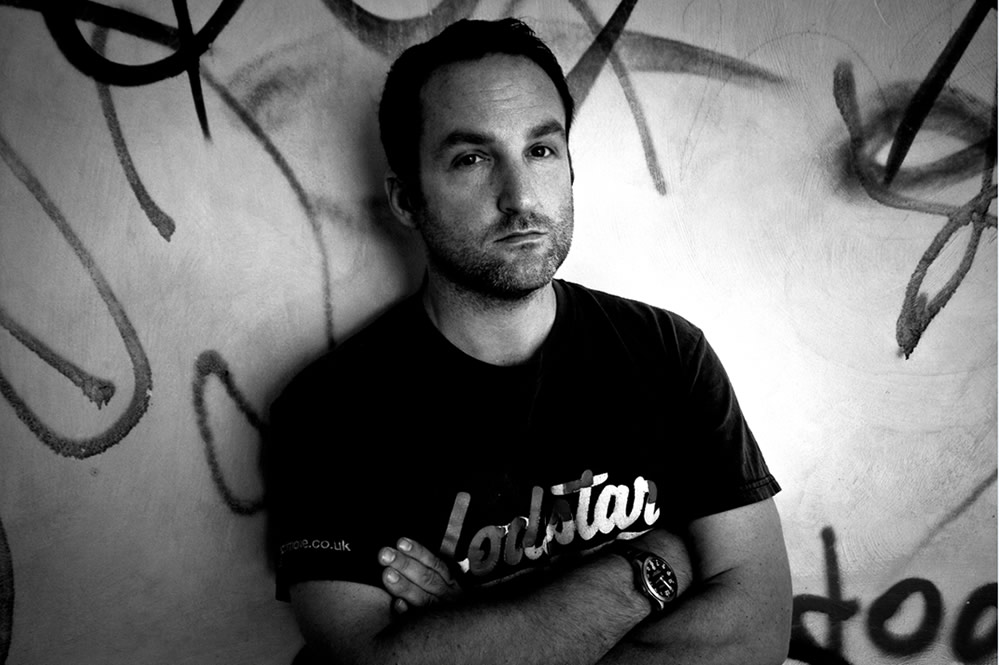 Ever since the Ancient Egyptians produced frescoes of the Nile, artists have been fascinated by rushing rivers, placid lakes and stormy seas, giving rise to a distinctive genre referred to as marine art, which encompasses prints, paintings, drawings and sculptures. Inspired by a passion for sea life, British-Guyanan sculptor Jason deCaires Taylor has given the term marine art a whole new meaning. Taylor, has dedicated the best part of his career to creating underwater sculptures that promote reef conservation and regeneration.

As a student of Sculpture at the London Institute of the Arts, Taylor had been interested in how changing the setting of an installation could heighten its impact, but it was when he began to submerge his work underwater that he found true purpose. As Taylor explains, “it was only when I started to think about sculpture as an artificial reef, as a form of conservation, that it started to really become exciting for me.”

A fully qualified diving instructor and award-winning underwater photographer, Taylor is keenly aware of the damage to reef systems caused by unsustainable levels of diving, over fishing, pollution and climate change: “I am inspired by what is happening to our environment and how we are losing great swathes of coral reef across the Caribbean. 80% is at risk or has already been degraded, so that is definitely at the forefront of my work.” Taylor set out to create underwater attractions in barren areas to lure divers and snorkelers away from natural reefs under stress and stimulate the regeneration of reefs by encouraging coral growth. “The aim is to try and bring people away from the healthy, natural reefs and bring them to an area where they can’t cause so much damage.”

The Caribbean was a natural place for Taylor to start. With a Guyanese mother and family in Barbados, Taylor says he has a close affinity to the Caribbean. He spent two and a half years living on the island of Grenada, where in 2006, he used marine-grade concrete to create the world’s first underwater sculpture park just off the coast. “For me it all started in the Caribbean. When I got to Grenada, it was such a beautiful place. I really loved living there and it inspired me to actually do what I wanted to do. I started there and that’s where I did my first test pieces. I got a very positive response from the Government and the dive community. If that hadn’t gone well I doubt I would have embarked on this career. It all took off from there.” 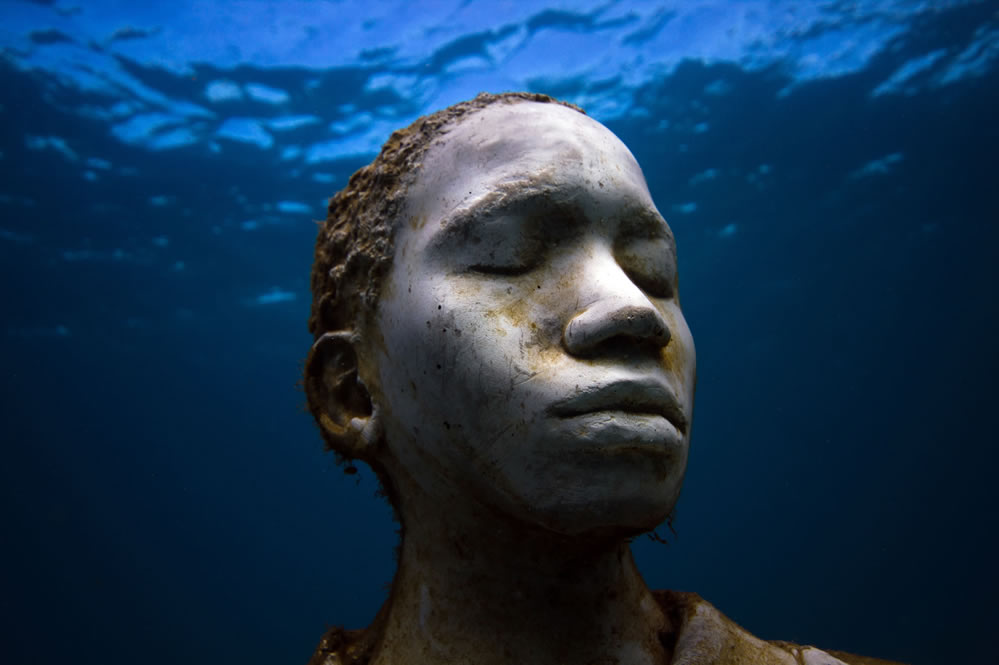 Since then Taylor has been commissioned to produce sculptures which have been installed in locations across the region, including a collection of 500 sculptures for MUSA, the Museo Subacuatico de Arte, located off the coast of the Mexican city of Cancun. Taylor explains how his sculptures encourage reef regeneration: “The sculptures in Cancun are situated downstream from one of the biggest reefs. The idea is that the eggs and sperm head towards the artificial reef. We also encourage it by using rough textures which give the coral a better chance to adhere to them. And, in many of the pieces, such as The Resurrection, I actually plant coral. It is very common that fan coral is ripped off the reef during a storm and thrown down on the sand where it eventually dies. After one storm we went around and collected pieces and re-planted them. Once they have a stable surface to grow, they can thrive again.” 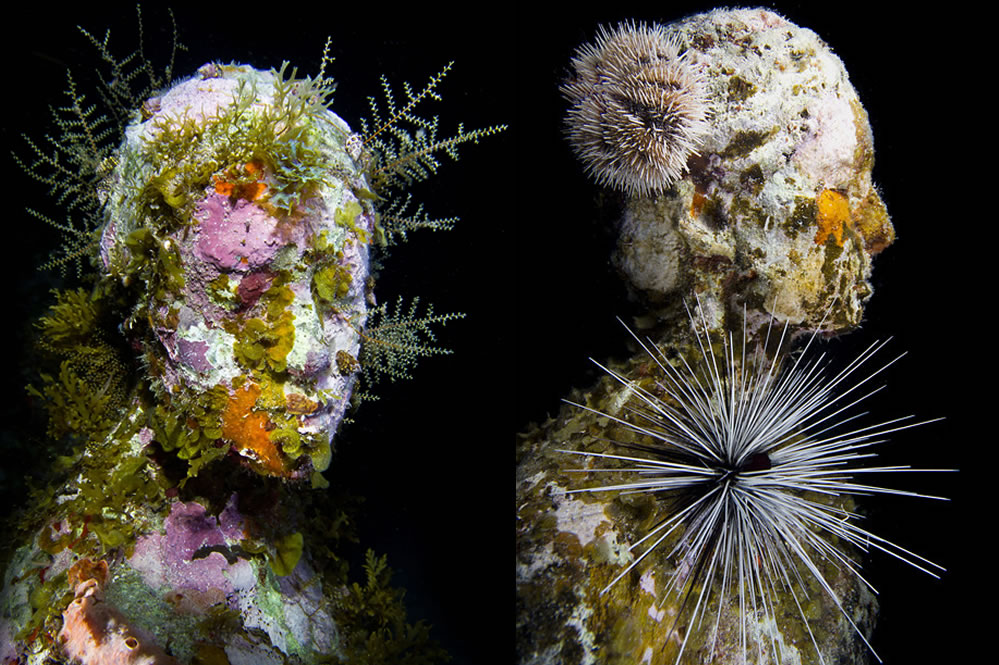 Taylor’s projects have been a great success. It has been estimated that 250,000 people now visit MUSA in Cancun each year, contributing $20 million USD to the local economy. Some of Taylor’s greatest personal marine protection successes have been with crustaceans. For example, in a once barren area, he installed a sculpture in the form of a Volkswagen Beatle with entrance holes large enough for lobsters but small enough to prevent fishermen from catching them with hooks. “It took about a year or two but when I visited there last time there were about 100 lobsters living inside the car.”

Taylor has experimented with all kinds of new ideas and technology too. He was commissioned by the illusionist David Copperfield to create a stand-alone piece which has been submerged off the coast of Musha Cay, his private island in The Bahamas. The piece is a real size replica of a Steinway Concert Grand piano that plays soft classical music “a bit like whale sounds or dolphin sounds” as a diver approaches. One sculpture in Cancun works in almost the opposite way: “It has a microphone inside and a hard drive. It’s constantly recording the environment as part of a study in collaboration with the University of North Carolina to understand how coral reefs work in relation to sound and how sounds affect navigation.” An above water sculpture installed in Brazil depicting a man walking on water incorporates solar panels to light it up at night.

Taylor’s latest work is the largest underwater sculpture ever created. Referencing the Ancient Greek legend of Atlas the Titan who was condemned to bear the heavens upon his shoulders, the 60 tonne, 18-foot-tall “Ocean Atlas” depicts a kneeling Bahamian girl holding up the ocean ceiling. As Taylor explains, “it’s a really ambitious project for me. It goes from the seafloor to the surface of the sea. It stretches from top to bottom. It was a massive challenge to install in the sea.” The hand-crafted sculpture joins several others by Bahamian artists Willicey Tynes and Andret John in the Coral Reef Sculpture Garden just off the coast of New Providence, the most populous island in The Bahamas. It was commissioned by the Bahamas Reef Environment Educational Foundation to create an eco-friendly attraction to divert divers away from natural reefs suffering from stress and to educate visitors on how our failure to address threats to marine life places a heavy burden on the next generation. 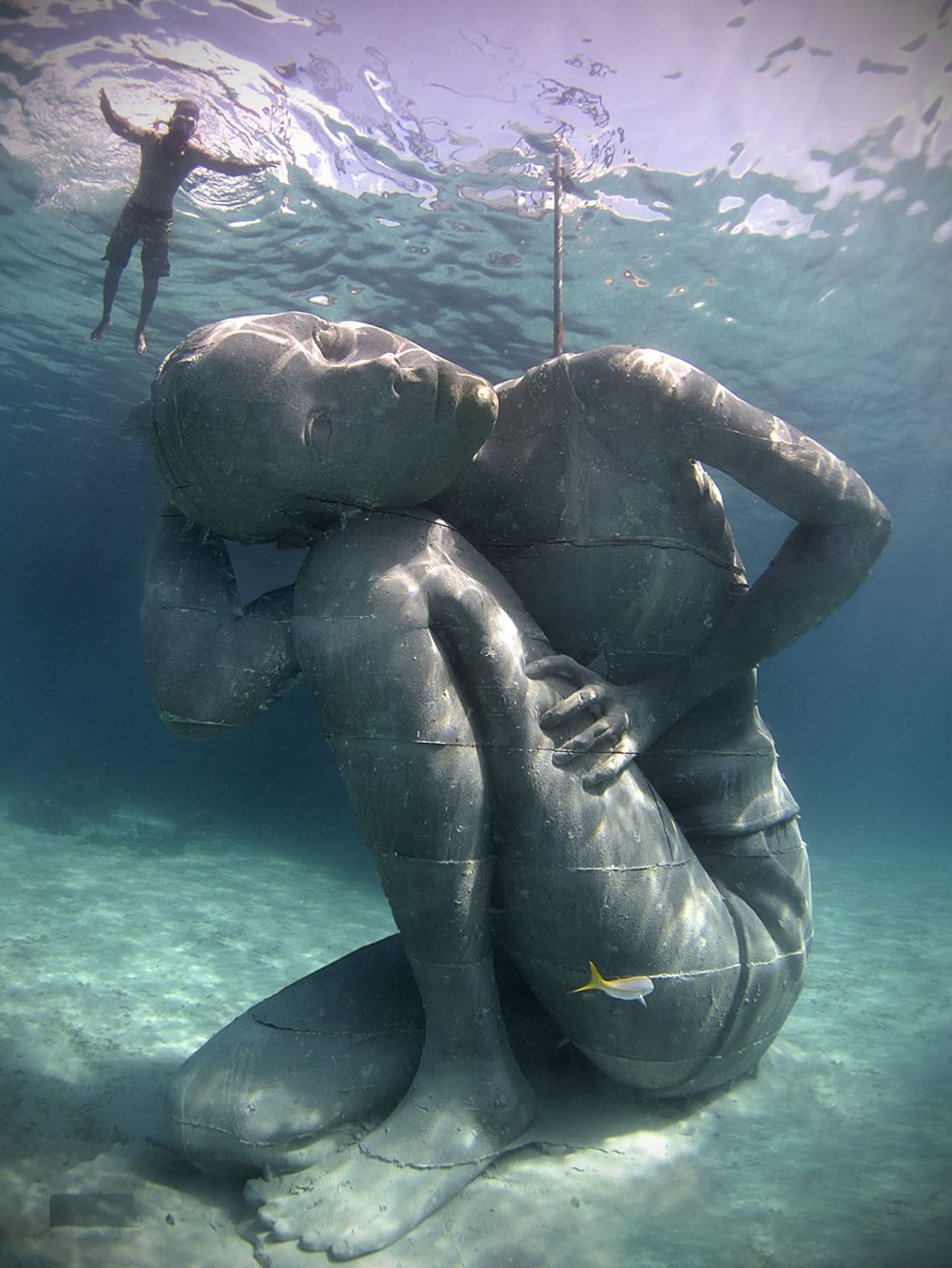 For Taylor, this is the key message he wants people to take away from his work. “It’s all about us trying to live in a more symbiotic and harmonious way with nature rather than working against it. As technology and cities evolve we are divorcing ourselves from nature and I hope my work reminds people of our dependency on the natural world and how spectacular it is.”

This article was originally published in Issue 5 of The Caribbean Property Investor magazine. To read the full issue, click here.